8A Vine Court
Back to Map

At Vine Court’s east end, No. 8A is a picturesque phased mid nineteenth- century three-storey and three-bay brick rebuilding of an early nineteenth- century timber stable building. Centre-bay provender-hatch openings endure, but a large ground-floor doorway has been reconstructed, and the parapet and the rear two bays of the north flank have been rebuilt, in part at least in 1932. Post-war light-industrial use was followed in 1987 by repair for exhibition design and architectural model making, which has been followed by conversion to use as a house.1

Vine Court
Contributed by Survey of London on April 24, 2018

Vine Court was formed around 1700 on land then or soon after held by Thomas Turner, a house carpenter, and was originally known as Walnut Tree Street. Houses included a group called Dupaz’s Buildings, named for Solomon de Paz, a Sephardic Jewish merchant. The court as a whole comprehended about twenty small houses by 1770.1 Its south side was largely lined with brick-built houses by 1817. On the north side timber outbuildings were gradually redeveloped and enlarged to serve Whitechapel Road premises. A scheme in 1867 for redevelopment of the west end of the court with ‘new streets’ came to nothing. The old two- and three-storey houses were generally in poor repair by 1910 and thirty years later there was extensive bomb damage. Little survives.2

Nos 11–14 to the south-west are two three-storey grey-brick clad houses built in 2016–17 to plans by Parker Clark, architects, for Ismail Parekh and Ahmed Bhayat.3 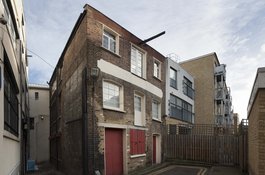