132 Whitechapel Road
Back to Map

132 Whitechapel Road
Contributed by Survey of London on April 23, 2018

A large eighteenth-century house on this site and Thomas Kincey’s extensive carriage-making premises to the rear were held by John Pinnell, an oil and colour man from around 1840. Pinnell Brothers gave way to Arthur Winckles Brown around 1886. A rear warehouse of 1855 that Brown raised a storey in 1886–7 was rebuilt in 1892–3 as the hip-roofed two-storey range that is now 123–127 New Road. The five-storey front block was not built until 1905, though with its stock-brick walls, red-brick and stone polychrome bands and cast-iron colonnette mullions, it appears distinctly more conservative in style than Brown’s earlier building to the west at 128–130 Whitechapel Road. Tailoring gradually moved in to the upper storeys of No. 132 from around 1920. By the time Brown died in 1929, he had converted the back parts of his yard to be a motor garage, rebuilt after the war and then again more recently as 121 New Road.1 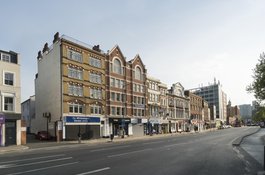