The Black Horse, 40 Leman Street
Back to Map

1879, public house, site of an inn and public house of this name since the late 17th century

Black Horse public house, 40–42 Leman Street
Contributed by Survey of London on May 6, 2020

An inn named the Black Horse was established on this corner site soon after the formation of Leman Street in the 1680s. It had coach-houses and stables to the rear. From 1730 the inn was in the tenure of Robert Biggs, followed by other members of his long-standing Whitechapel family. In the 1750s it was the Black Horse and Trumpet, and then by the 1780s the Black Horse and French Horn. Usage reverted to the Black Horse in the nineteenth century when Barclay, Perkins & Co. held the property. The four-storey building dates to 1879, when rebuilding work was undertaken by John and Henry Cocks of Mile End Road. In 1881 Morris Barnett, from Shoreditch, ran and lived above the pub with his wife, ten daughters, two servants and a nurse maid.1

The Black Horse principally addresses Leman Street, with a short north elevation to Alie Street, where the ground floor extends beyond the main building line to form a podium. The pub is architecturally restrained, with plain stock-brick elevations with red-brick dressings, the closest thing to an external flourish being found above a passageway to the south, where there is a tripartite first-floor window in a segmental relieving arch. In the late nineteenth century, four entrances led to the main ground-floor bar arranged around a servery against the west wall. Partitions to snugs dodged slender cast-iron columns that gave structural support to allow for the glazed podium.2 Before 1900 the servery was reduced in size and positioned centrally, staircases also rearranged to enable better access to the first- floor dining room and create more bar space. By 1930, the servery had been further reconfigured, the snugs removed and the ground floor divided simply into a public bar and a saloon. The Black Horse is said to have been frequented by merchant seamen, with the upstairs room used for storing their personal items and cases gratis. After short spells as ‘Bar Bed’ and ‘The Zeppelin Shelter’, the Black Horse recovered its original moniker in 2013. Successive refurbishments have rendered the interior almost devoid of historic features, but the exterior remains largely that of 1879.3The passageway under the southern bay of the Black Horse led to the inn’s stable yard, which extended to the south behind Nos 44–50. By 1800, the yard was occupied by a coach-master, Thomas Lewis, who was followed by funeral coach-masters, Giles & Son. John Miller, a bonded carman, leased the site from the mid- nineteenth century until 1911 and was responsible for rebuilding the two- storey stables in 1884. The premises were subsequently used as a builders’ yard by James Jennings and successors until they were sold in the 1980s and redeveloped with Nos 44–50.4 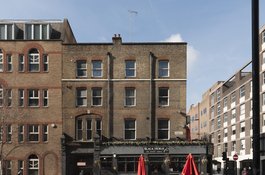