14 Scarborough Street
Back to Map

There was some bomb-damage repair of the eleven houses that survived on the south side of Scarborough Street’s west end in 1949–51. However, plans for a large commercial building on the site were approved in 1956 and after 1960 the whole block was cleared, used for a short time as a site for mobile homes, and then given over to car parking. Tower Hamlets Council approved residential development of the block in late 1980, shortly before the site became one of sixteen across London to be protected by the Greater London Council’s Community Areas Policy, introduced by the Council’s Labour administration in 1981 to preserve established residential areas in deprived localities on the margins of central London against development pressures, especially office expansion. This support for community-based development fell away upon the Conservative government’s abolition of the GLC in 1986, but this site had been developed with terraced housing in 1984–5. The sixteen timber-frame, three- storey, brown-brick houses were standard products from Llewellyn Homes Ltd of Eastbourne, who erected the houses for the GLC as Walter Llewellyn & Sons Ltd. Grouped as five, six and five, the two-bay houses in the central group are larger, for eight persons, than those to either side, for six.1 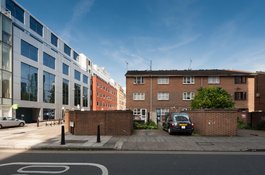 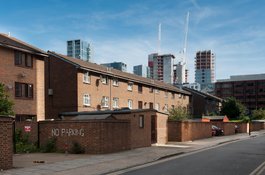