By 1806 there was a pub at this address known as the Rodney’s Head. Admiral Lord Rodney had gained fame in 1782 and died in 1792. There were improvements to the rear in the 1820s. In 1853 Robert Elliott, the proprietor, added a back concert room that became a Music Hall called the (New) Prince’s Hall of Varieties. This comprised fourteen rows of seats either side of a gangway, for 160, with a balcony for 80 more, facing a small stage at the north end. Documentation for the rebuilding of the front has not been traced, but the façade has the appearance of coinciding with other works of the 1850s. It quaintly combines medievalising hoodmoulds, a Venetian Gothic glazing pattern, which once included intricately traceried window tympana, and more classical Italianate elements. There was also a ‘Club Room’, probably on the first floor, altered in 1855. In 1874 a new sixty-year lease was granted, but faced with MBW demands for improved egress, the Music Hall closed in 1885, its space given over to a recast public bar until 1900 when there was demolition to the rear for extension of the railway line. This remained a popular pub, listed among London’s best in 1989, until it was converted to be the Funky Munky in 2000. Closure followed in 2004 since when there has been shop use.1 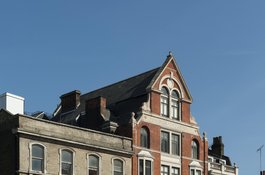