61 Mansell Street
Back to Map

61 Mansell Street
Contributed by Survey of London on May 5, 2020

The four-bay, four-storey plain brick-fronted office building of the early 1960s on this site somewhat echoes the fenestration of its eighteenth-century predecessor. That three-storey, basement and attic mansion had a narrow blind north bay in a flat five-window façade. In 1814 John Hunt held this house on a 61-year lease that had begun in 1772. Mercantile residents included Captain John Webber in the 1690s, Isaac Fernandes Dias in the 1730s, Isaac Mussapha, Harry Akerman from about 1766, John Le Coq and Asher Goldsmid into the 1790s. The ground floor accommodated an entrance hall, parlour and counting house and the first and second floors were laid out with four rooms each. A three-stall stable, coach-house and washhouse extended back on the south side of the plot. Another back building went up in 1849 when Israel Lazarus, a trunk-maker, was resident. Soon after the building was divided, a house (No. 61) to the north, and business premises (No. 61A) to the south that gained a shop over the forecourt and a long warehouse to the rear. Later nineteenth-century occupants were A. D. Posener, Polish-Jewish tobacconists.1

Second World War bomb damage saw the building condemned and the site lay vacant until 1961 when plans for the site’s present office building were quickly enacted following two unexecuted schemes of 1958–9. After a few years a ground-floor garage was partially converted and given a shopfront. In 2002, a single-storey rear extension was enlarged in connection with the construction of 25 West Tenter Street, a four-storey office building developed by Michael Sherley-Dale’s City North Group that is architecturally deferential to its neighbour at No. 23.2 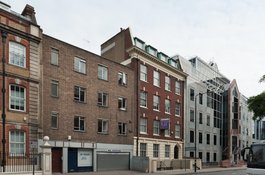 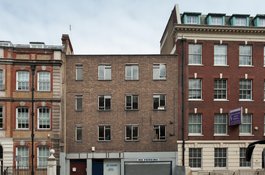