Royal College of Pathologists, 6 Alie Street
Back to Map

Royal College of Pathologists, 6 Alie Street
Contributed by Survey of London on May 6, 2020

Three single-fronted early eighteenth-century houses on this site were occupied in 1733, from west to east, by Mary Ormond, a widow, Elias Cole and Matthew Hopkins. Among seemingly prosperous merchants resident here in the decades either side of 1800 were C. and W. McClure, Aymaric Mavit, Jacob Eleazer Jacobs, John Chorley, and Moss and Solomon Jacobs. In the 1790s, the easterly house appears to have been a school for orphan girls run by the Orphan Society of the Spanish and Portuguese Jews (Shaare Orah ve-Abi Yetomim).1

Over the course of the nineteenth century industry took over gradually. From the 1820s to the 1870s, the tenant of the westerly house was Henry Harris, a wholesale stationer, followed by J. E. & H. E. Harris, cigar importers and wholesale furniture directors. By 1890 the house was occupied by a furrier. Over the same period the middle house was used by a cigar dealer, a kosher cattle dealer, and a tailor before lying empty then being taken in 1899 by Charles Lazarus as a loan office. The easterly house was the home of Alexander Moss, a naturalist and former ‘curiosity dealer’, in the 1850s and ’60s. Spells of use by a looking-glass maker, a sponge merchant, an importer of foreign goods, and a cigarette manufacturer followed. When the freehold of the three houses was sold in 1880 redevelopment with a warehouse was anticipated, but the houses hung on until 1908.2

They were replaced in 1908–9 by a factory that extended back to North Tenter Street and included an 80ft chimney. This was built for T. A. Mason by Todd & Newman of Hackney; the first occupants were tobacco manufacturers. Rag- trade tenants followed, most prominently Ornstein & Masoff Ltd. Around 1960 the building became known as Naytex House after the textile company that was its chief occupant.3

A chunky Postmodern six-storey office block replaced the factory in the late 1980s. Known as the Goodman Building, this stood for less than thirty years. It was demolished in 2016 to make way for the Royal College of Pathologists, which had decided to move its headquarters from Carlton House Terrace to Whitechapel, a telling shift. Their purpose-built premises went up in 2017–19 to designs by Bennetts Associates, with Gilbert-Ash as contractors. The building reused existing foundations but was otherwise radically different to its predecessor. Its elegant brick and glass façades are restrained to Alie Street, intending to evoke classical repose, and energetically angular with a zig-zag profile to the rear on North Tenter Street. Inside, there is an emphasis on openness, with a double-height entrance hall leading to a ground- floor lounge and library, and six upper floors with a lecture theatre and function rooms below offices and roof terraces.4 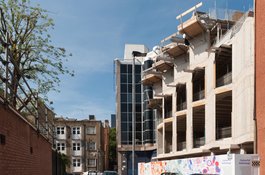 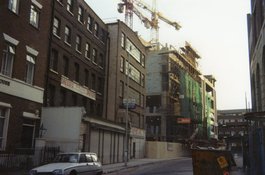 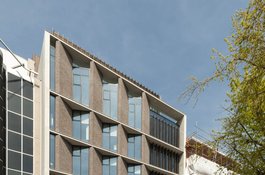 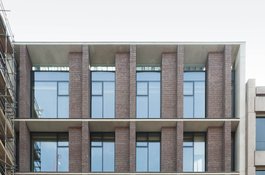