Zetland House
Back to Map

1 North Tenter Street (Zetland House, on the site of the Jews’ Orphan Asylum)
Contributed by Survey of London on Aug. 4, 2020

This was the site of the Jews’ Orphan Asylum from 1846 to 1876. This institution, a boarding school for Jewish orphans, had begun in 1831 in response to the impact of cholera. Its first home was in a house on the east side of Leman Street (the site of No. 79), and it crossed to the west side (No. 78) in 1844. The charity attracted funding from high-profile supporters and a donation of £2,000 in that year from Abraham Lyon Moses (1775–1854), a more widely philanthropic Aldgate-based wholesale clothier who specialised in sailors’ work wear. This permitted the Leman Street house to be abandoned in favour of a purpose-built Jews’ Orphan Asylum on a large plot immediately north of St Mark’s Church, with frontages to St Mark’s Street and East Tenter Street. It was built in 1846 by Richard Ashby, the architect remains unknown.1

The first building allowed for forty orphans to be housed, educated and trained before being placed out in apprenticeships. A critical internal report in 1853 found the premises satisfactory, but the educational standards ‘radically faulty’ and the children dull – ‘the reflex of intellect not apparent in physiognomy, gait or conversation’. It urged modernization through the introduction of a Pestalozzian system of instruction for a school of eighteen boys and ten girls.2 Perhaps action was taken. Remembering the place in the early 1860s, the Rev. Charles Voysey recalled ‘a very home-like comfortable building, which looked always light and glad and rang too with merry voices as of children who were loved’.3

The Asylum was substantially enlarged in 1865–6 to designs by Nathan Solomon Joseph, a committee member, with A. M. Cohen & Co. as builders. This resulted in an oddly asymmetrical T layout, the top bar of which was Joseph’s symmetrical almshouse-like three-storey range along St Mark’s Street. There was a Dutch gable over a central entrance flanked by five-bay dormitory wings. The main block behind remained flanked by open ground north and south for enclosed courtyards or playgrounds. Further expansion in 1871 increased the number of beds.4

In 1876 the Asylum merged with the German or Ashkenazi Jews’ Hospital (Neveh Zedek, Abode of Righteousness), founded in 1795 following a proposal by Abraham and Benjamin Goldsmid, opened on the south side of Mile End Road in 1807, and re-established in larger premises in West Norwood in 1863, where the Asylum’s children now moved. The Asylum site was transformed by the merged institution, which in 1879–80 redeveloped along St Mark’s Street putting up nine shop units that were known as Tenter Buildings. Tenements were built above with four large commercial blocks to East Tenter Street following in 1882–3.5

War damage condemned these buildings and the site was cleared in 1954. The property was picked up by the Grosvenor Land Co. (Holdings) Ltd, an unexpected interloper in Whitechapel, which in 1962 put forward plans for a four-storey and basement warehouse across the whole site, in what appears to have been a speculation. Designed by Nicol Stuart Morrow, this warehouse was built in 1963–4, with William Moss & Sons Ltd, of Cricklewood, as builders. It is a strikingly bold Modernist building, steel-framed with reinforced-concrete slab floors for large open interiors. The elevations are faced with dark-grey flint brick, with sections of the upper storeys projecting on pilotis, and narrow high-level strip windows that keep the place private, something reinforced by an absence of signage. By 1968 the premises were called Zetland House (1 North Tenter Street), after an early occupant. The Zetland Warehouse Co. Ltd then took ownership, occupancy passing to A. Beckman Ltd, textile wholesalers. The Midland Bank converted the building in 1978–9, inserting racking for archives and other storage, the top floor being laid out as offices. There was subsequent use as a cheque-processing centre for Barclays Bank. Since 2010 the building has been occupied by N. M. Rothschild & Sons Ltd, an investment bank and financial services company.6 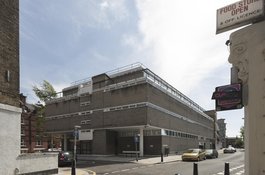