In the eighteenth century this was the site of the westernmost of three large broad-fronted mansions with ample gardens backing onto the Tenter Ground. Behind a 39ft front, the ground floor of the house, as described in 1814, had ‘a capacious noble entrance hall, an elegant dining room, communicating with a back room by a pair of double folding doors, and one other room’; here was space enough to entertain sixty it had been said in 1772. The first floor included ‘a large handsome drawing room’, a library, a small sitting room, and a bedroom. A further eight bedrooms lay across the second and attic floors. Service rooms and quarters were in the basement. A laundry 55ft long had been noted and to the rear there was a ‘large piece of ground, wherein is a detached building, containing sundry offices, and over it a handsomely finished sitting room with a dome’.1

The earliest recorded occupant of this house is Edward Cooksey (d. 1751), a Blackwell Hall cloth factor who was resident by 1733. He departed around 1741 and the Rev. Joseph Denham, minister of the Presbyterian chapel on Alie Street’s north side, was resident for a couple of years. Samuel Storke junior was living here by 1744, two doors west of his father. He inherited his father’s business trading with North America in 1746 and, a widower, married Mary Wilkes (1728–1808), the sister of the politician John Wilkes, a year before his own death in 1753. She in turn inherited, remained in this Alie Street house and soon married George Hayley (1723–1781), the chief clerk of the Storke business. Hayley grew in wealth and stature through continuing trade with the American colonies to become one of the City’s wealthiest merchants, MP for the City of London in 1774, soon after the firm’s involvement in the Boston Tea Party, and President of Lloyd’s of London. After his death, Mary Hayley ran the business from Alie Street until 1784 when she went to Boston to recover debts. By 1795, the house was held by the Goldsmid family business, run by George Goldsmid and Daniel Eliason in partnership up to 1813. The property was auctioned in 1814 and had come by the 1840s to house George Firmin, a manufacturing chemist. There was fire damage in the 1850s after which the house was subdivided into flats.2

It seems that this house was demolished in the 1870s and replaced with two five-storey warehouses that covered the whole site back to 20–22 North Tenter Street. A further storey was added in 1917 and more rebuilding followed.3

The site was cleared and in 1988 a six-storey office block with a polished brown-granite-clad front and a red-brick elevation to North Tenter Street was erected on behalf of Kay Wilhelmisen, a Danish developer. Known first as Jutland House, later as Michael’s House, in the 1990s it was occupied by Jyske, a Danish private bank. In 2018–19 the building was extensively refurbished, refronted and raised by two storeys to designs by GPAD London for Maurice Investments Ltd. Re-named Wool + Tailor, said to be a reference to local trades, the top floor accommodates a ‘business lounge amenity space’ above open office floors fashioned in a ‘media style’.4 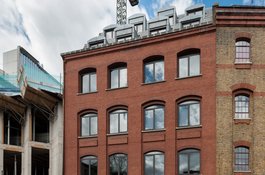