42 Alie Street
Back to Map

This group of four small houses was very likely a product of Samuel Hawkins’ speculations in the 1720s along with 30–36 Alie Street to the west. With only slightly lower storey heights in three storeys and attics, they are not immediately seen as greatly different to their neighbours at Nos 30–36. However, they lacked space to the rear, where they backed onto the premises of the Black Horse Inn, and there was no garden access to the Tenter Ground. With just one room per storey, each wider than deep, these were always significantly humbler dwellings. They originally had blind windows above their entrances, which were directly in front of winder staircases, and away from shared party-wall chimneystacks. The houses did have forecourts like those further west, but these were built on in 1873, when Richard Harry Heather, an accountant on Little Alie Street, had small single-storey shops built. These left access to the original front doors open, but those intervening spaces had been incorporated into the shops by 1896 when basements were dug out at Nos 42–44. Through much of the nineteenth and twentieth centuries the residents and businesses here were largely Jewish, the buildings behind the shops variously used as workshops and dwellings. Alterations and partial rebuildings occurred sporadically, not infrequently in response to fire. By the 1970s Nos 38–42 had been rendered, their fronts painted white. Otherwise dilapidated, the group was refurbished with No. 36 in 1987–8 to create office accommodation. A further upgrade was undertaken by Hunter and Partners Ltd, architects, in 1993 and in 2000 the group was again converted to be flats, shopfronts exchanged for rusticated walls. The attics had been reshaped in gambrel form, and the front walls much rebuilt, with windows where there had been blind openings.1

No. 40: From 1734 to his death in 1742 Captain Clere Talbott paid tax on this house, though he was probably sometimes in Jamaica. By the 1840s this was another tailor’s house. More unusually, it was occupied by an undertaker, James Bernardin, from 1870 until around 1890 before passing through use by a hairdresser, a café, a ladies’ tailor, and kosher poulterers, with rag-trade businesses dominant from 1946.

No. 42: This was the house held by Strickland Holden, the carpenter-surveyor, here by 1733 to 1736. He had been born in Greenwich, the son of a joiner, Thomas Holden, who was active on the other side of Alie Street. After moving away from Whitechapel, Strickland Holden collaborated with Robert Morris in Holborn in 1744, and designed a Palladian school in Clerkenwell in 1759–60. Eleazar Magnes, a merchant, was present around 1800 and the property saw tobacconist and newsagent use from the 1840s until about 1900. After that it served as a chandler’s shop, a workshop for an electrical and mechanical engineer, an ironmonger’s and then again as a tobacconist’s. By 1975 it was occupied by Miss Karen, wholesale ladies’ fashions.

No. 44: John Pettit (d. 1736) had this house by 1733, followed in the 1740s by Richard Towle. Samuel Barnett was the occupant around 1810. By 1851 it was leased by William Jones, a shaver born in Jamaica, then from about 1855 to 1894 it was occupied by John Jacobs, a barber, who lived with his wife Theresa and fourteen children in the three rooms above the shop. Brief spells as a woollen drapers and a printers followed, then from 1921 No. 44 was a general shop run by the Hoffmann family, and thereafter a greengrocer’s. From around 1950 to the early 1970s F. Shaffer Ltd, sewing-machine dealers, were here.2 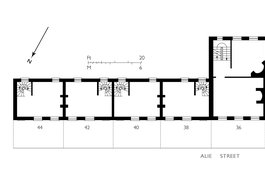