The Sir Sidney Smith public house was present on this site as such by 1816, named after the naval hero of the American and French wars, Admiral Sir William Sidney Smith. It was rebuilt in 1936 for Truman, Hanbury, Buxton Ltd through A. E. Sewell, the firm’s architect, and W. Loweth & Sons Ltd of Clapton, builders. A plain and nicely proportioned four-storey brick-faced pub, a faience name plaque specifies ‘Sir Sydney Smith’. Even so, it was renamed Pepper Pot House in 1998, but after a brief closure around 2015 reopened under its old name, salvation possibly due to the arrival of a youth hostel opposite.1 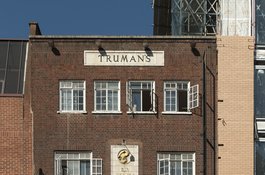