Royal College of Psychiatrists, 21 Prescot Street
Back to Map

Royal College of Psychiatrists, 21 Prescot Street (on the site of the London Infirmary and the Magdalen Hospital)
Contributed by Survey of London on Aug. 3, 2020

An office block that spans from Magdalen Passage to 23 Prescot Street occupies a site with a remarkable history, that of a mansion of the 1680s that was converted along with adjoining smaller houses in the middle decades of the eighteenth century to host the London Hospital in its original form, adapted afterwards to be the Magdalen Hospital for penitent prostitutes. A larger site was redeveloped in 1778–81 as a terrace of nine houses called Magdalen Row, from which No. 23 survives.

The present office building on the site of the seven most easterly Magdalen Row houses was erected in 1986–8 to plans by the Barnard Partnership as a clearing and call centre for the Abbey National Building Society, which demutualized to become a public limited company in 1989 and was then taken over and rebranded as Santander in 2009–10. Its four-storey eight-bay form, striped with stock-brick and precast concrete, has the characteristic ungainly bulk of its period and building type, yet it is comparatively shapely by local standards. It was refurbished in 2013 to house the Royal College of Psychiatrists, consolidating from premises in Belgrave Square and Aldgate.1

The west part of this site was where Prescot Street’s largest first-phase house went up in the late 1680s, a mansion reserved for himself by Sir Thomas Chamber. With a rental value of £40 where almost all the street’s other houses were valued at £15 to £17, it was probably double fronted. Chamber left the house to his widow, Elizabeth, in 1692, but its occupant from 1693 was John Colson (d. 1709), a leading mathematical and astronomical teacher and an associate of John Flamsteed and Edmond Halley, the first astronomers royal. Colson used it as a boarding school where he ‘taught these Mathematical Sciences, (viz.) Arithmetick, Algebra, Trigonometry, Navigation, Astronomy, Dialling, Surveying, Gauging, Fortification, and Gunnery, the Use of the Globes, and other Mathematical Instruments, Projection of the Sphere, and other parts of the Mathematicks. And Youth Boarded.'2 John Colson FRS (1680–1759), a relative more eminent to posterity, was among those who lodged here. In the 1730s the mansion was held by Joseph Moses and then by David Lopez Pereira (d. 1756), an investor in the Royal African Company and the Bank of England who had an estimable Hebrew library.3

In 1741, the London Infirmary, the forerunner of the Royal London Hospital, acquired this ‘large convenient house in the most airy part of Goodman’s Fields’.4  It was adapted with wards for men and women and the following year a further house adjoining east was taken to isolate patients with venereal diseases. By the end of 1744 the infirmary occupied two more contiguous houses further east, one used as a dispensary. Extensive improvements were undertaken in 1745 by the infirmary’s governors, led by John Harrison, a surgeon, and overseen by Isaac Ware, acting as surveyor. William Simon Youd, a plasterer living at what is now 30 Prescot Street, stuccoed the fronts of the houses, adding rusticated quoins at the ends and ‘THE LONDON INFIRMARY SUPPORTED BY VOLUNTARY CONTRIBUTIONS BEGUN NOVEMBER THE 3, 1740’ in large letters. Railings guarded the forecourts with stone obelisks at either end. An inspection of the property by a committee of governors, including Harrison, initiated plans to rebuild a ‘shed’ at the back of the former mansion’s garden, to accommodate a range of functions, including a waiting room, a chapel, a laundry, a distillery, a laboratory, a mortuary, and a cold bath. Ware prepared designs and Joel Johnson, the local carpenter, and Robert Taylor were contracted as builders in partnership. The building was completed in 1747, but there were reports that the cold bath was poorly finished and complaints from neighbours about a cesspool emptying into Chamber Street.5

In 1746, the infirmary expanded to the west, grafting on the house on the site later occupied by 23 Prescot Street. Robert Lindsey (d. 1777), a wine merchant, who had lived there since at least the 1730s, gave this house to the infirmary and relocated to the north side of Prescot Street. His house was converted to be offices and residences for infirmary staff , with a ground- floor back room put to use as a surgery. Other houses on Chamber Street were also taken in. Despite the works and the expansion, the infirmary had been looking for a larger site for a purpose-built hospital since 1744. This had been secured by 1750 and the London Hospital opened on Whitechapel Road in 1757.6

The Magdalen Hospital for the reception of penitent prostitutes succeeded the infirmary in its former Prescot Street premises. This self-consciously innovative institution was established in 1758, having been first mooted in 1750–1 by Robert Dingley (1710–1781), a wealthy Russia Company merchant, a governor of the Foundling Hospital, a leading antiquary and connoisseur, and a gentleman architect, operating in collaboration with Jonas Hanway (1712–1786), another Russia Company merchant and a serial philanthropic reformer. Their proposal, which lay dormant for several years, was borne out of an understanding of prostitution as a social problem and a desire not just to provide refuge to girls and young women seen as victims, but also to reform the individuals in body and soul through a solitary (prison-like) life of work and prayer. In 1758 the Society for the Encouragement of Arts, Science and Commerce offered a medal for the best plan for a charity for reforming prostitutes. Dingley and Hanway both submitted schemes, as did John Fielding and Saunders Welch, Henry Fielding’s sidekick, an indication of the project’s unavowed links to policing.

From such an influential base, and through the publication of promotional pamphlets, the charity became something of a sensation and attracted wealthy subscribers. That enabled the rapid formation of the Magdalen Hospital. Dingley arranged to lease the London Hospital’s Prescot Street property for seven years, which tenure ended up doubled. The Magdalen opened on the 10 August 1758, eight girls aged nine to fourteen reportedly presenting themselves to be the first inmates. With the focus on rehabilitation rather than correction, they and their successors were encouraged to submit to three- year terms and to regard the hospital as a home before returns to families or virtuous employment. The premises comprised five houses on Prescot Street (the later sites of Nos 19–23) and at least two, eventually four, behind on Chamber Street, providing space, air and privacy. Originally intended to hold fifty beds in wards divided according to behaviour and education, those deemed most serious and best behaved being rewarded with a private room, the Magdalen boasted 136 beds by 1766. John Entick then reported that the institution was ‘formed out of several contiguous messuages or tenements, with a wall and small area before it: and to prevent the prying curiosity of the public, there is not only a close gate and a porter, but the windows next the street are concealed by wooden blinds sloping from the bottom of each, so as to admit the light only at the top’.7

The Magdalen followed a similar trajectory to that of the infirmary, finding its late seventeenth-century buildings costly to repair and the location increasingly inconvenient. Plans to erect a purpose-built hospital in Southwark were formed in 1763, but there were delays. By 1769 there had been 1,500 admissions; the institution continued on Prescot Street until 1772 when it did move to Southwark.8

The chapel was open to private visitors on Sundays, when offerings were taken. The infamous Dr William Dodd (1729–1777), the ‘Macaroni Parson’ who was executed for forgery, often preached and was formally recognized as the Hospital’s chaplain in 1761. Horace Walpole visited alongside Prince Edward in 1760:

‘This new convent is beyond Goodman's Fields, and I assure you would content any Catholic alive. … The chapel is small and low, but neat, hung with Gothic paper and tablets of benefactions. At the west end were inclosed the sisterhood, above a hundred and thirty, all in greyish brown stuffs, broad handkerchiefs, and flat straw hats with a ribband pulled quite over their faces. As soon as we entered the chapel, the organ played, and the Magdalens sang a hymn in parts; you cannot imagine how well. The chapel was dressed with orange and myrtle, and there wanted nothing but a little incense, to drive away the devil – or to invite him. Prayers then began, psalms, and a sermon; the latter by a young clergyman, one Dodd; who contributed to the Popish idea one had imbibed, by haranguing entirely in the French style, and very eloquently and touchingly. He apostrophised the lost sheep, who sobbed and cried from their souls – so did my Lady Hertford and Fanny Pelham. … From thence we went to the refectory, where all the nuns, without their hats, were ranged at long tables ready for supper.’9 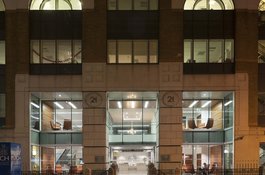