16 Prescot Street
Back to Map

1858–9, built as Whitechapel County Court, Charles Reeves, architect. Converted to restaurant use in 1995.

Three houses stood on this site until the late 1850s. Following Thomas Quarrill’s rebuilding of a row of twelve houses in 1746–9, No. 16 was the address from 1749 of John Bailey, a silk factor, who was joined by William Glazbrook around 1775. The nineteenth century saw use by Jewish glass dealers, tailors, and manufacturers. No. 17 housed Matthew John Rippingham, a solicitor, by 1826, in partnership with William Rose in the 1840s. No. 18, which adjoined Magdalen Passage from 1778, was occupied by John Murray, a carpenter, from the 1770s to the 1790s, He had a long workshop building to the rear alongside the passage, and the upper storeys of the house were divided into multiple small bedrooms. Murray also held further houses to the east, and others on The Highway. No. 18 was tenanted by a cigar-maker in the 1840s, and by 1851 was home to two custom-house officers and Charles Steinhairt, a German merchant, among others.1

The freeholds of Nos 16 and 17 were advertised for sale in 1856, No. 18 was also acquired and the striking Ruskinian palazzo that was Whitechapel County Court was built in 1858–9. The County Courts Act of 1846 divided England into sixty districts for a new network of courts to deal with small debts and civil claims, London beyond the City being covered by ten new courts. A Whitechapel district was initially overseen from the building on Osborn Street where the abolished Court of Requests had sat. A decade on it proved too small to cope with demand and the Middlesex magistrates selected the site on Prescot Street for a new building. Charles Reeves (1815–1866), architect to the Metropolitan Police from 1843, had been appointed Surveyor of County Courts in 1847. By 1857 when designs for the Prescot Street building were prepared, he was working in partnership with Lewis G. Butcher. Reeves and his partners were responsible for sixty-four court buildings, and while Reeves settled on no standard formula, his designs were underpinned by a focus on architectural dignity and the economic use of space, particularly attending to circulation patterns. The Whitechapel County Court was, like other London courts, a storey taller than provincial counterparts. Holland & Hannen were the builders.2

The Prescot Street façade departed from Reeves’s usual Italianate and strictly symmetrical practice. This was one of only a handful of his courts to play with elaborate detailing. His tendency was to suppress extravagance in favour of understated domesticity, but here, possibly at the hands of Butcher, Ruskinian influences found expression through rich brick polychromy, Kentish red, Suffolk white and Staffordshire black, along with York stone dressings and cast-iron colonnettes, that all combines to lift the heaviness of the palazzo façade. The west bay was given greater width and prominence, projecting forward to emphasise what was the public entrance under a tripartite window. The judge’s entrance to the east led to discreetly separated spaces with their own staircase. There were administrative offices on the ground floor, and judicial offices on the first floor in front of the spacious top-lit courtroom. Residential accommodation for office-holders was on the second floor and in the basement. In keeping with civil procedures, no provision was made for cells on site.3

From around 1883 to 1904 the court gave up some of its upper spaces to serve as a convent for the Sisters of the Immaculate Conception, a branch of the Holy Family of Bordeaux, associated with English Martyrs’ Roman Catholic Church further west on Prescot Street. Whitechapel County Court was consolidated with Shoreditch and Bow county courts and in 1943 use of the Prescot Street building transferred to the Ministry of Social Security, followed from 1968 by the Department of Health and Social Security, and then from 1988 the Department of the Environment. By 1969 area railings had been lost and the west door converted into a window with the front steps removed. The building was listed in 1973 and repairs were undertaken in 1989 and in 1993 through Property Holdings (Central London).4

Two years later, Brian Temple Associates oversaw a conversion for restaurant use with basement kitchens, first-floor stores and offices, and a second-floor flat for workers. With financial backing from Michael Gottlieb, Cyrus Todiwala, a chef of Parsee descent and high reputation, established the premises as Café Spice Namaste. A conversion back to office use has been proposed in 2020, the lease being set to expire.5 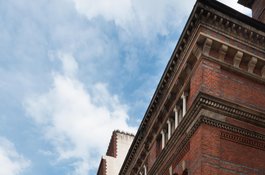 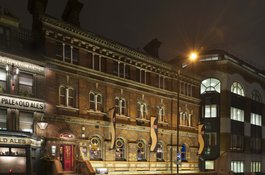 16 Prescot Street in early 2018, from the north-east
Contributed by Derek Kendall 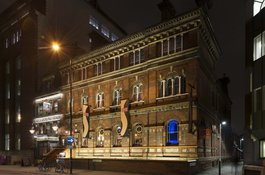 16 Prescot Street in early 2018, from the north-west
Contributed by Derek Kendall