24 Osborn Street
Back to Map

Osborn Street's east side had a new frontage formed by road widening in the 1780s. It was only slowly built up. A courthouse flanked by tall sugarhouses took up places at its centre in the 1790s. The Court of Requests for the Tower Hamlets was a small claims court established in 1750 to succeed Stepney’s manorial Court of Record in the north-east of Whitechapel parish in dealing with debts under 40_s._ Its courthouse on Osborn Street (on the site of Nos 22–24), built in 1790–2 following enabling Acts, was said by J. P. Malcolm to have been ‘handsome’ and appears to have had a pedimented façade. Samuel Hawkins, the treasurer, and perhaps also the builder–architect, laid the foundation stone. The County Court Act of 1846 abolished courts of requests, but these premises continued to be used for Whitechapel County Court until 1859.1

The present building at No. 24 was erected in 1904–5 for Joseph Donn of Princelet Street as developer, to designs by J. R. Moore-Smith, with C. North of Stratford as builder. Designed with ‘offices’ below a dwelling, and the third window bay squeezed in as an afterthought, it may have been intended for Louis Turiansky, a physician and surgeon, who immediately took up what was to be a long-lasting residence, his surgery to the rear. The building retains its original shopfront under an applied fascia, but was cut down in post-war repairs. It originally had a gable-fronted attic.2 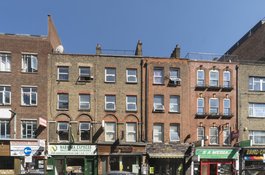