119 Leman Street
Back to Map

This group went up in 1845–6 on what had been part of the large Rohde sugar refinery site as a corner-wrapping terrace of fourteen three-storey shophouses – 14 Hooper Street came down in the 1980s. It was a substantial speculation by George William Mayhew, a young builder–developer, whose base was on Argyll Street in Westminster. Mayhew (1818–80) was a trained architect, but he might have involved his older architect brother, Charles Mayhew, as he did in 1846–9 for a higher-status development at Ennismore Gardens near Knightsbridge. Their father, James Gray Mayhew, an architect and district surveyor in Westminster, had died in March 1845; Mayhew started building on Leman Street in May. The houses, shops and workshops with dwellings over, are of red brick with yellow stock-brick trim, the windows and parapets recessed so as to give the projecting sections the appearance of pilaster strips. A long range to the rear may have been a warehouse, coach-house and stables erected by Mayhew in 1846.1

The Mayhew property came into the hands of the Co-operative Wholesale Society in the early twentieth century. The block may have been acquired in order to avoid rights-to-light claims or perhaps with a view to future replacement with a structure to match the scale of its CWS neighbours, but nothing much was done and the Society continued to let shophouses to individual tenants up to about 1970.

Work to the front walls was approved in 1937–8 when L. G. Ekins, the CWS architect, also proposed further alterations. Attention to cornices was specified, and it is tempting to see Ekins’s hand in the toothed brickwork in the parapet recesses, though this detail could be original, as the diagonally set courses above the second-storey window arches appear to be.

From the turn of the century to the Second World War, No. 119 was occupied by the East End Mission to the Jews. In the 1920s the corner unit at No. 117 was taken by the National Co-operative Publishing Society Ltd, succeeded in the 1930s by the Anchor Co-operative Society Ltd until around 1970. The International Co-operative Women’s Guild had No. 135 for a period either side of 1950.

By the 1940s the warehouse range to the rear was let as a metal-box factory. It was demolished around 2000 for Pump House Mews.2 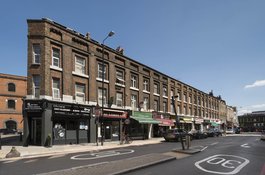 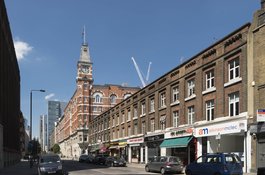 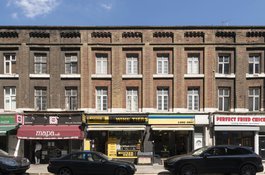