27 Whitechapel Road
Back to Map

27 Whitechapel Road
Contributed by Survey of London on March 29, 2017

This building of 1926–7 was erected to designs by Higgins & Thomerson, architects, and first occupied in part by Isaac Woolf Silberstein for restaurant premises. Its predecessor, the premises of a manufacturing stationer, had from 1909 housed a cinema (‘Picture Palace’) run by Solomon Czershorski. Much earlier, in the 1780s, John Philip Webber, a sailcloth weaver, was the occupant of the building on this site.1 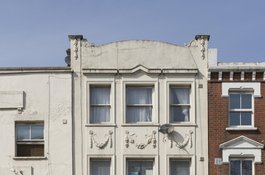