The London Tilbury and Southend Railway Company’s Hooper Street hydraulic pumping station is the only substantial railway goods-handling building to survive in Whitechapel. It was built in 1886–7, presumably under the supervision of Arthur Lewis Stride, the railway company's general manager and engineer, probably working with Augustus Manning, the East and West India Dock Company's engineer, to power the hoists, capstans and cranes at the Commercial Road Goods Depot. Hydraulic machinery was supplied by Sir W. G. Armstrong, Mitchell & Co. The building has the same elevational treatment as that of the demolished warehouse, of red brick, with stone imposts to arch-headed windows and striking blue-black engineering-brick dressings. The main part of the building, which has a steel-framed roof, housed four Lancashire boilers with an engine room above for two 150hp pumping engines. It was built on the footprint of a German Lutheran chapel of 1819, the congregation of which moved to Goulston Street; its passing resemblance to an eighteenth-century church has been noted. The three-stage square tower at the west end, where the church porch had stood, housed two weight-loaded hydraulic accumulators. A chimney rose 125 feet from the south-west corner where its base survives.1

The pump house was listed in 1973 and passed into the ownership of the Greater London Council. Wine-bar and other conversion schemes of 1984 and 1986 came to nothing.2 The building appears to have remained semi-derelict until it was converted to office use in 2002–4. This project by City North Group as developers was led by Michael Sherley-Dale, working with Peter Thompson, Easton Masonry, TFA Interiors and Crittall for replacement windows. City North sold the property to Grainger Trust Plc in 2005, which sold it on in 2006. First tenants were stockbrokers. In 2019 the Pump House was occupied by Stockwool architects.3

Whitechapel’s largely sugar-trade dependent German population had a presence at Hooper Square for most of the nineteenth century through St Paul’s Reformed Church. This accommodated London’s third oldest German Protestant congregation, founded in 1697 as the German Evangelical Reformed Church by Calvinist refugees from the Palatinate. The church began at the Savoy Palace and moved to Duchy Lane, close by, in 1771. That site had to be abandoned to make way for Waterloo Bridge. The church council favoured a move to Whitechapel to be amid the area’s growing Deutsche Kolonie and a church was built on the east side of Hooper Square in 1818–19. It was a typical Nonconformist preaching box with a west porch, probably galleried as there were 260 sittings in the 1870s. The church prospered under the pastorate of Johann Gerhard Tiarks from 1822 to 1858, which united Calvinist and Lutheran strands of Protestantism. George Wicke, a sugar refiner, bequeathed £300 in 1829 and small schools were added to the east, for boys in 1834 and girls in 1852, both rebuilt in 1879 to designs by Thomas and William Stone, architects. The congregation was once more uprooted in 1884 and the church was demolished in 1886 to make way for the somewhat church-like pumping station to the Commercial Road Goods Depot that survives on the south side of Hooper Street as the Pump House (see p.xx). The congregation opened a newly built church and schools in Goulston Street in 1887.1

The mysterious depths of the Hooper Street railway bridge
Contributed by eric on Nov. 1, 2016

I walked Hooper Street often, either taking left or right from Gower's Walk. Left was easy, a right at the next corner went down Back Church Lane to Cable street, and was one way to our shops. The other way went past the famous Pump House and then dog-legged around to meet with Leman Street and then on to Cable Street. But first one had to pass under a wide bridge in Hooper Street, this holding up the spur and sidings from the main line into Fenchurch Street, with the rails then entering the first-floor goods platforms of the Tilbury Warehouse. Under the bridge on both sides were large wooden doors entering into dark caverns, and there were two rail lines across Hooper Street itself. There was other rail storage, served from above by a single-truck hydraulic lift from the Tilbury. As a child I regularly saw trucks being hauled by capstan across the road from one dark cavern to another. An operator would deftly wind a wagon rope around a moving capstan and the truck would move. As appropriate the operator would remove the rope from the capstan with a lasso- ing like motion, and the truck would move on its own at a slow pace. I would have given a week’s pocket money to look inside these dark places, but while such transfers were in progress, all traffic of all kinds was prevented from being under the Hooper Street bridge.

Not long back, in about 2010, I visited Hooper Street again. The bridge has gone, as have all railway workings and storage and the Tilbury itself. But, I walked along the gutter on the northern side, and at a point where the road surface had worn thin, saw the unmistakable glint of a very short piece of bullhead rail pointing across Hooper street. The track was still there, but had been overlaid with Tarmac. My heart sang.

I lived in Gowers Walk in the early 1950s, and walked past the Pump House weekly en route to the Cable Street shops with 'mum'. At the time the nearby Tilbury Warehouse was active, and goods steam trains would pass over Hooper Street bridge. The pumphouse was used, I think, to power hydraulic accumulators, which in turn would power small goods cranes on the platforms of the Tilbury, and they powered capstans which I saw hauling goods trucks across Hooper Street from one dark place to another. Trucks were lowered from the first-floor rail lines to ground-floor sidings.

German church at the Old Pump House
Contributed by eric on Feb. 19, 2017

I knew the Pump House site well as a child, but not was there before it was constructed. I have a paper from Germany about a particular church organisation (the St Paul's German Reformed Church) which I believe had a church on the site of the Pump House, but which was ousted from it when the Tilbury Warehouse etc. was built. I have no interest in religious matters, but at the end of WWII I trod the bombed premises of the church on its new site at Sydenham (I shared my time between living at Aldgate and at Forest Hill, both of which had German communities.) 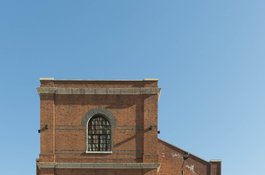 Pump House, view from the west in 2019
Contributed by Derek Kendall