Mint House, 77 Leman Street
Contributed by Survey of London on May 6, 2020

The south end of this side of Mansell Street from around the middle of this site almost to the Prescot Street corner appears to have been built up already by the 1670s before the street had been properly laid out. The character of this development is unknown, but it does seem clear that this section of frontage was in later times comparatively humble, presumably in part at least on account of constraints imposed by the presence of pre-existing buildings. There was an early double-fronted mansion on the north part of this plot, its most notable resident being William Scullard (d. 1792), a merchant who was here by 1770; it was divided in the nineteenth century. A smaller house adjoining to the south that was home around 1760 to Captain Richard Sanders had by 1800 been adapted to house Percival and Marsh, wholesale slop (second- hand clothing) sellers, a further indicator of the lower-status of this end of the street, and of the proximity of Rosemary Lane.1 These and two further modest houses southwards were demolished around 1880 and replaced by a block called Victoria Warehouses. Seven four-storey warehouses, raised a storey in 1888, were arrayed around a covered central yard accessed from Mansell Street through a bold arch in the central bay which was crowned with a round-headed pedimental gable. Victoria Warehouses was almost exclusively populated by tea merchants, including Walter Henry Whittard from 1904. Others including cork merchants, printers, the Anglo-Scandinavian Condensed Milk Co., and wholesale grocers were also tenants here.2

Bomb damage destroyed the warehouses. In 1953 the cleared plot was adapted to use as a car park then in the late 1950s a four-storey office building went up at Nos 75–79 and was occupied by the National Dock Labour Board. Thirty years later, following approvals in 1987, the whole site was redeveloped as Mint House, the present six-storey office block, built to designs by the Elsworth Sykes Partnership, architects. The façade echoes Mansell Court in its proportions and symmetry, but in a calmer register, less historicising and more futuristic, swathed as it is in reflective glass and brushed steel. A two-storey central oriel or pod projects to carry a superfluous balcony. The main entrance is unexpectedly located to the north of the central gesture. Since 2015 Mint House has been offices for the Chartered Institute of Public Finance and Accounting.3 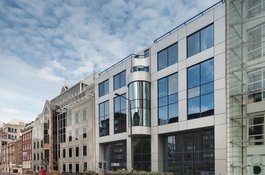 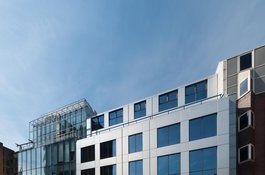 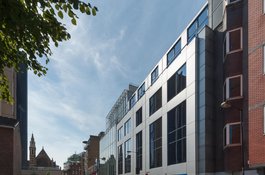