Two shophouses here were replaced in 1913–14 by the Prudential Assurance Company. The Prudential’s house architect was Paul Waterhouse, and the builders were Rice & Son of Stockwell. The result was an assured commercial classical building with a Giant Ionic Order and segmental pediment to a façade the surface area of which has less brown-brick walling than Portland stone dressing. The explanation for such atypically substantial premises for the locality lies with the Prudential’s central role in social welfare after the 1911 National Insurance Act, which led to the paying out of health insurance benefits by ‘Approved Societies’. The ground-floor interior had a central public hall facing a long clerks’ counter to the west. The superintendent’s office to the rear was top-lit. The Prudential had departed by 1946, just before the abolition of this form of welfare. A triple-arched rusticated ‘basement’ was replaced by the insertion of a full-width shopfront in 1957–8 in a supermarket conversion for Super Stores Ltd.1 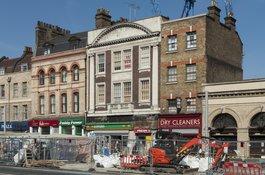 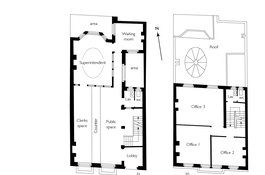 271-273 Whitechapel Road, ground- and first-floor plans as in 1914
Contributed by Helen Jones