From around 1905 to the mid-1930s, the building at No. 32 housed Alec Snelwar’s Warsaw Kosher Restaurant, frequented by Leon Beron, a notorious slum landlord who was murdered in 1911, and otherwise linked to gangsters and anarchists. No. 38 was Morris (Curley) and Rosie Kersch’s Curley’s Café from 1937, a haunt of artists and anti-fascists until this group of shophouses was destroyed in the Blitz.2

The site was redeveloped in 1961–2 for Commerce House (Gower Street) Ltd, to designs by J. E. Morgan and Partners, surveyors of 226 Whitechapel Road, by Courtney & Fairbairn Ltd, builders. Of four storeys, basement and attic and brick-faced, the building was intended for office use with ground-floor shops. However, it immediately fell to use as cutting and machine rooms for clothes manufacturing, and was extended in 1987–8. The ground floor, a restaurant since 2003, became the Sonargaon Restaurant, Bangladeshi and Indian Cuisine.3 This was replaced in 2018–19 with a six-storey block for fifteen flats (The Osborn Apartments) over commercial spaces, including a basement gym. The developer was Goldenstone working with Kitesgrove, Mirfield Contracting Ltd, Moreno:Massey, architects, and Barnes Webster & Sons Ltd, builders.4 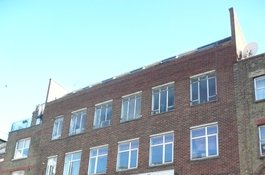