This seven-storey speculative block was built in 1967–8 to be warehousing and showrooms over shops, to designs by Carl Fisher & Associates, architects. The speculation evidently failed to attract sufficient commercial tenants and part of the building was adapted in 1970 for storage use by public bodies, conversion for the Ministry of Public Buildings and Works being to plans by Stone Toms & Partners. The V&A National Art Library was one occupant and through the 1980s two floors were occupied by the Royal Commission on the Historical Monuments of England as an archive store, for glass negatives such as the Bedford Lemere collection. There was further adaptation for a language school in the early 1990s. More recently flats were introduced on the top floor and the building was relaunched as the E1 Business Centre and then E1 Studios in 2015, when the façade was embellished with black-and-white ornamental patterning.1

Neil House in the 1980s - use for the Royal Commission on the Historical Monuments of England
Contributed by Ian Leith on Feb. 10, 2017

Due to the risk of flooding before the construction of the Thames Barrier (1982), I was instructed by Eric Mercer to help organize the Royal Commission on the Historical Monuments of England (or RCHME, later part of English Heritage/Historic England)'s transfer of the contents of the basement archive store at Great Westminster House on Horseferry Road to Neil House, Whitechapel Road, around 1979-81.

It was very suitable for the RCHME/National Monuments Record since it was (a) above Thames flood levels, (b) it had semi-industrial floor-loading, and (c) it was close to Aldgate East tube station, as well as offering us far more space than the Commission had ever had – probably bigger than any previous office space since 1908. I am pretty sure the RCHME could never have afforded any remotely proper archive facility, and we may well have obtained plans from official sources who were helping us to find a suitable property purely for ‘storage’. The total extent of archival advice was, as explained to me by a structural engineer: carefully space out the filing cabinets to distribute the sheer weight of glass negs. In the huge piles of plans and oversize copies deposited on the floor, I found more than a few large-format prints taken by the great Victorian photographer Roger Fenton – since then we have found dozens more.

The various rooms (four) on two floors were fitted out with racking which formed the basis of filing backlogs arranged topographically – these largely still exist here, where I work now in the Historic England Archives in Swindon. The actual physical move from vans or lorries was carried out by RCHME staff and I remember several boxes of Bedford Lemere negatives (12x10 inch glass plates) being smashed accidentally as they were passed on from hand to hand up stairways: this only proves the then almost total lack of concern in grasping that photography was a historic recording medium, thus the insufficient resources for proper handling and storage in a building without any air-handling or dust filtering, i.e., an era as distant to conceive as possible given the current attitudes towards the photographic legacy and its conservation constraints which we now take for granted.

The name Neil was never evident, and the building seemed rather connected to the surrounding garment industry in the area so it could have been built as a speculative property for the rag trade, though one wonders how this came into any official ownership or lease. There was a bed for a night security man and no other tenants that I can recollect. I forever link it with Bloom’s restaurant near the Whitechapel Art Gallery where I would get a take-away of salt-beef on rye with new green pickles and then cycle back to the Royal Commission's headquarters at Savile Row in the West End, or home.

Neil House around 1990 - use for the Royal Commission on the Historical Monuments of England
Contributed by Jonathan Smith on Feb. 15, 2017

Neil House was a particularly unlovely building - hot and airless in the summer and freezing cold in the winter. Indeed, the most interesting thing about the place was its location on the corner of Whitechapel High Street and Osborn Street (which leads on to Brick Lane); at the time the whole area was still at once both seedy (one particular source of amusement being to watch meth drinking vagrants in the park opposite, for example) and vibrant, in its own funny kind of way (the Whitechapel Gallery was just up the street and there was a plethora of good, cheap eateries in Brick Lane). Coincidentally, I briefly re-entered the building in 2007 (albeit only as far as the inside of what had subsequently become a significantly remodelled entrance lobby) when I went there to meet up with someone who was studying at a language school which operated from somewhere within. I imagine that the whole place would have had to be internally altered, to some extent, as the large rooms that existed when it was used as a depository wouldn't have been suitable for a language school. 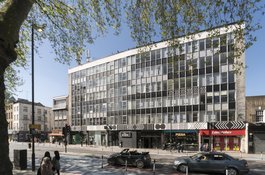 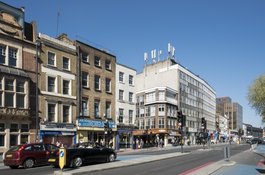