43 Philpot Street
Back to Map

PHILPOT STREET E1 1. 4431 (West Side) Nos 43 to 69 (odd) TQ 3481 15/502 II GV 2. An early C19 symmetrical terrace divided in the centre (between Nos 55 and 57) by the entrance to Ashfield Street. Yellow stock brick with stone coping and stucco band above ground floor. Centre block, Nos 49 to 55 and Nos 57 to 63, have a higher brick parapet than the 2 ends of the terrace. 3 storeys and basement, 2 windows each. Gauged flat arches to recessed windows with glazing bars in semi-circular headed recesses on 1st floor. Ground floor windows round headed and with gothic glazing bars except those of Nos 65, 67 and 69 which have gauged flat arches and no gothic glazing bars. Round headed doors with fanlights and mostly fluted or panelled pilasters. Doors of Nos 43, 55 and 57, on returns to adjacent streets, have keystones with plaster heads and decorated impost bands.

The surviving houses at 43–69 Philpot Street were constructed around 1838–44 as Philpot Terrace and Taymouth Terrace, names abolished when the present street numbers were assigned in 1864. These three-storey and basement houses depart from the austerity of the smaller dwellings in Walden Street and Ashfield Street, bearing fluted door surrounds and round-headed first-floor relieving arches. Subtle variation at Nos 43–63 hints at the aspirations of William Black, who was granted a lease for those properties in 1844. These taller houses have round-headed ground-floor windows with delicate Gothic tracery. The corner dwellings have rear bows and side entrances with modeled imposts and mask keystones. Each has a two-room plan with staircases in the bows. In contrast, Nos 67–69 (odd) are just one room deep with rear staircases.

When Edward Denison took up residence at No. 49 in 1867, it was, in the words of the Saturday Review, to ‘wrestle with pauperism by setting his face against bread and meat and money doles’. During the eight months that he lived in Philpot Street, Denison immersed himself in practical initiatives: he delivered speeches to dock labourers, introduced evening classes for working men and established a school in John’s Place, Stepney. By 1911 Philpot Street had acquired a large Jewish population mostly composed of Russian and Polish immigrants employed in the tailoring industry. Victor Vorzanger, a Dutch musician and teacher, lived with his family at No. 53. Nos 59 and 61 had been converted into lodgings for medical students and district nurses, while No. 63 was occupied by the clergy. Many of the houses in Philpot Street were restored to the possession of the London Hospital. Those at Nos 43–69 have been converted into clinics, research units and offices for hospital administration.1 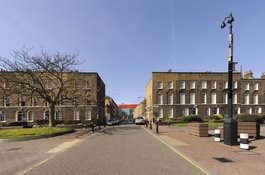 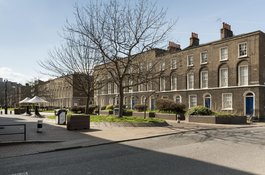