Floyer House
Back to Map

Floyer House is a students’ hostel of 1933–4, constructed to designs by Edward Maufe by L. W. Whitehead for the London Hospital Medical College. Rear additions carried out later in the 1930s and in 1958–9 have produced an extensive building that continues in use as a student hall for Barts and the London School of Medicine and Dentistry. Of beige brick, the understated entrance front to Philpot Street comprises a five-storey block flanked by lower one-bay wings linked across the façade by a ground-floor arcaded loggia. Maufe confined external ornament to a carved armorial tablet sculpted by his longstanding collaborator Vernon Hill. Despite hesitation from the medical college, Maufe insisted on the inclusion of nude cherubim to the college arms on the grounds of ‘very widespread English tradition’. Perhaps Maufe’s reasoning chimed with the college’s aspiration to offer its medical students ‘something comparable to the life of Oxford and Cambridge colleges’.1 Maufe’s plan combined this ideal with clarity and necessary economy. A larger hostel had been envisaged in 1930, but its scale was reduced owing to the constraints of the Depression. The ground floor was devoted to communal activities, with a common room, a dining room, a library and a writing room. The upper floors contained student bed-sitting rooms and shared bathrooms. Each of the bedrooms was equipped with ‘a gas fire (with meter) set as a panel in the wall, a sophisticated modern wardrobe with places for everything, a divan bed, an armchair and a knee desk’.2  The fifth floor was occupied by two galleried top-lit squash courts, squeezed under a steep mansard roof. The north wing was assigned to the housekeeping staff with a ground-floor kitchen. Maufe’s design was exhibited at the Royal Academy in 1934, and described in the _The Lancet _as ‘particularly direct and modern in spirit, relying on good proportion, materials and workmanship rather than ornament’.3

Three years later it was necessary for the hospital’s surveyor, N. H. Oatley, to produce plans for an extension to the north wing. Designed with the austerity and neat proportions inherited from Maufe, this addition secured extra bedrooms and enlarged the kitchen, staff rooms and basement stores. The south extension of 1958­–9 was constructed by Gee, Walker & Slater Ltd to designs by Sydney Clough, Son & Partners in cooperation with H. Reginald Ross, along with the advice of John Liversedge & Associates, consulting engineers. Less deferential, it is a severe four-storey block with an I-shaped plan that generates an internal quadrangle with the earlier builds and a yard to the east. It has continuous fenestration on its upper residential floors and a separate entrance in Ashfield Street articulated by Brindle-brick bands. It contained a dining hall, a games room and a first-floor hall equipped with a stage and changing rooms. Fifty new study bedrooms raised the residential capacity of the hostel to 150 students, approximately a third of those enrolled at the medical college. Sixteen bedrooms were allocated to female students, who had a separate common room on the ground floor. The hostel owes its name to Professor Michael Floyer, the former dean of the London Hospital Medical College.4 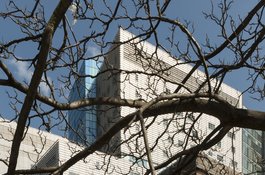 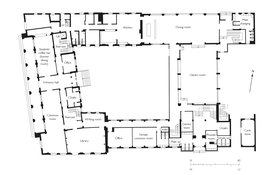