119 Back Church Lane
Back to Map

109–129 Back Church Lane (on the site of the People's Arcade, later Premierland)
Contributed by Survey of London on June 5, 2020

Nos 109–129 Back Church Lane of 1994–6 are the private development sibling of 43–47 and 49–58 Gower’s Walk. The ten houses at 109–127 Back Church Lane are similar to those on Gower’s Walk, but No. 129 is a four-storey block of thirty-two flats that is more assertively postmodern, with four stock-brick staircase towers lit by circular windows framing more polychromatic elevations incorporating second-floor balconies on spindly white columns. The set-back upper storey has gablets to parapets as on the houses. To the rear there is car parking, a garden and a tennis court. The plain brick-fronted three-storey nineteenth-century predecessors of the houses at the south end of this development at Nos 109–117 included the Cherry Tree and, behind, Mundy’s Place.1

Nos 119–129 are on a site that had a notable early twentieth-century history of institutional use. Around 1897, when T. M. Fairclough was the freeholder, an array of early nineteenth-century courts – Providence Place, Brunswick Place and Williams’s Rents, and larger properties along Back Church Lane were cleared to make way for five-storey blocks of industrial dwellings with shops in a scheme by Frank Moss of Walthamstow working with John Robert Smith, architect.2 That came to nothing and the site remained empty. In 1904 an alternative scheme proposed a People’s Arcade, or covered market, designed by Crickmay & Heath, architects. This was withdrawn, but something closely similar was built in 1905–6 for the East London Friendly Trading Society, a body of Jewish traders whose promoters were Mark Patchik, J. Logoff, J. Eichenbaum and M. Fernbach. C. G. North of Stratford was the builder. An irregular rectangle with single-storey stock-brick outer walls had a glazed roof in three light steel-trussed sections. Two stone-dressed entrances on Back Church Lane had some presence, with pediments, channelled pilasters and voussoirs. Within, there was granolithic paving and the perimeter was lined with brick-built stalls and stores for dry trades (including grocers, drapers, tailors, bakers, boot makers), and there were two inner islands of back-to- back units for wet trades (butchers and fishmongers, for whom there were tanks for fish to be sold live), with an office and general storage over one block, giving a total of 145 stalls. A passage westwards to 49 Gower’s Walk (see above) provided for deliveries, WCs and a poultry slaughterhouse, that entryway being topped by caretaker’s accommodation. Much was expected of the People’s Arcade, which attracted support from the Mayor of Stepney, the Rector of St Mary’s and the two local MPs, Stuart Samuel and William Wedgwood Benn. The Trading Society’s promoters proposed a limited company on co-operative lines so that stallholders might become their own landlords. It was suggested that such projects might replace street trading. Of several similar initiatives, the longest lasting was on Cannon Street Road.3

To judge by the advertising of stalls, the market struggled from the outset. In 1909 the Alexandra Hall Ltd took a twenty-one year lease from Fairclough, applying to the LCC in 1910 for permission to adapt the premises to be a vast roller-skating rink, soon reduced in scale by the notional insertion of a 1,000-seat cinema on the south side, all to designs by Henry Smith of Smith and Churchward, architects. Rinking crazes were invariably short-lived, and this scheme was not put into effect. The following year and despite objections a more modest plan was implemented by the insertion of cross walls to form a smaller cinema in the central part of the building that could also be used as a boxing arena; the slaughterhouse was repurposed as dressing rooms.4

The venue was dubbed Premierland after a competition in The Sporting Life found that to be the most popular name. Harry Jacobs, a boxing promoter, promised it would be ‘like a miniature Olympia’.5  Under Jacobs, Premierland’s first great period as a boxing venue made it (with Wonderland on Whitechapel Road) one of ‘the major nurseries for Jewish boxers … boxing halls that attracted a broad cross-section of fight fans’.6  A key attraction was ‘Kid’ Lewis, the Aldgate Sphinx, who won the European featherweight title at Premierland in 1914. Premierland closed in 1917 under wartime restrictions, but reopened in 1923 after alterations overseen by J. Stanley Beard, architect. A second period of boxing acclaim ensued under Mark Littlestone and Victor Berliner. Among their stars was another highly successful Jewish boxer, Jack ‘Kid’ Berg, the Whitechapel Windmill, world light welterweight champion in 1930. Meanwhile there was also sporadic use as a cinema, with screen and orchestra at the west end, as well as for other events including a Jewish trade union and friendly society meeting in 1920, and a concert with Judah Rosenfeld, the ‘wonderful Cantor from Palestine’, and orchestra in 1925. All this came to an end in 1930 when the lease expired, Littlestone and Berliner bankrupt owing arrears of rent. Fairclough reclaimed the property.7

The building fell to mundane storage, the northern and southern rows of stalls from the People’s Arcade having survived. It served as garaging for T. M. Fairclough, which was nationalised in 1950 as British Road Services. The Jewish Board of Shechita added a kosher slaughterhouse to the rear in Fairclough’s yard, to designs by Philip Lebor, architect.

North of Premierland, Nos 149–153 was a block of dwellings in front of a courtyard of warehouses, built by Bryan Corcoran, engineers, in the 1890s, and Nos 157–159 was a brass foundry. Like Premierland, they survived until about 1990 when the site was cleared pending redevelopment.8 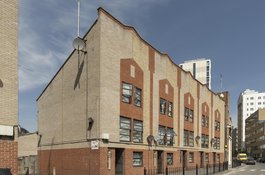